Who has the right to be right? 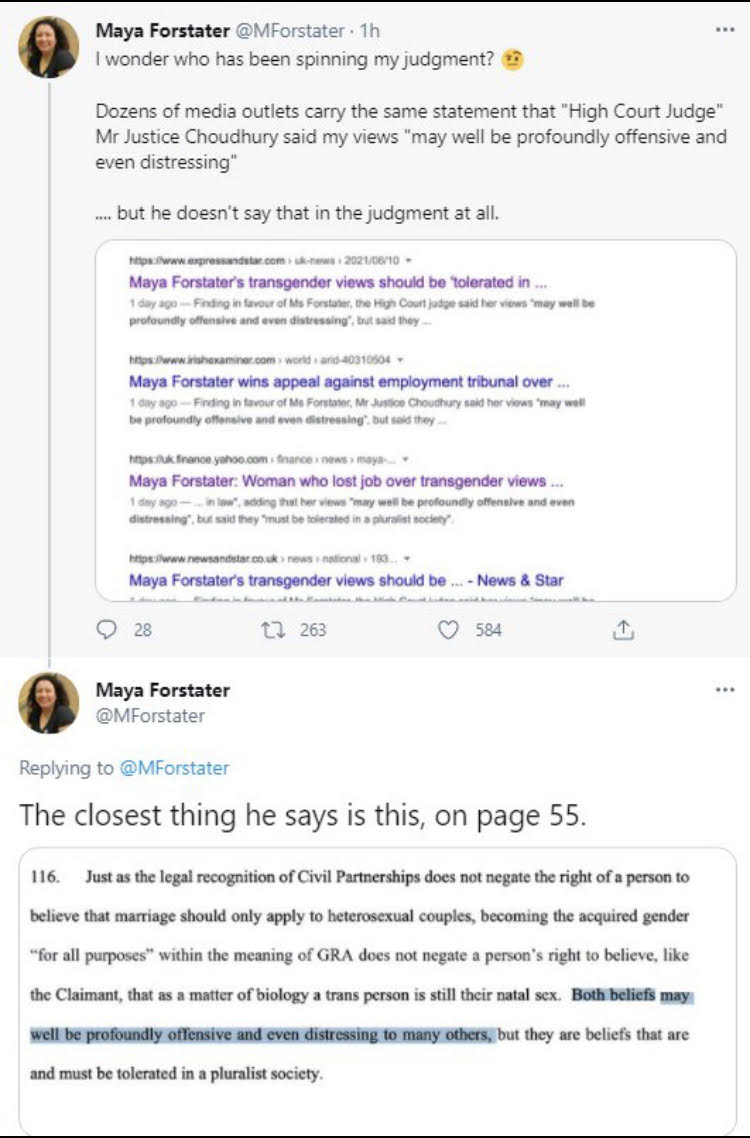 Following on from the ruling regarding the Maya Forstater appeal, the vitriolic Gender Critical flag-waving was abruptly halted in its tracks and swiftly replaced by a quite staggering complete loss of a grip on reality!

Having expected to bathe in a wave of glory, Forstater read through all the media reporting of her ‘victory’ and was clearly devastated to find they had all quoted the same Judge’s comment, prompting her to tweet as follows:

Dozens of media outlets carry the same statement that ‘High Court Judge Mr Justice Choudhury said my views “may well be profoundly offensive and even distressing” …. But he doesn’t say that at all.’

In an attempt to prove her point, she then went on to print an extract from the actual ruling and highlighted the following text:

The closest thing he says is this, on page 55: ‘both beliefs may well be profoundly offensive and even distressing to many others’

Can we just take a moment to think about that!

Maya Forstater is complaining that a statement quoted by the media was false and that the Judge never said it. So let’s just repeat the Judge’s words, but this time place in bold ONLY the words that were identical to those used in the media quotes:

So in an attempt to prove that words were never stated and that the media lied, Maya provides reference to the precise extract and proves that the exact same words were stated. You really couldn’t write it! Sorry Maya, in this case, the Media did not misrepresent or lie in any way.

Having now seen the way the ruling has been reported, Maya and her fellow Gender Critical cult followers are clearly upset that the victory they were gloating about  is nothing of the sort, and contrary to their claims, the Judge made it very clear that his judgement in no way endorsed her gender critical ‘beliefs’ :

‘its role is simply to determine whether, in reaching the conclusion that it did, the Tribunal erred in law. Our judgment should not therefore be read as providing support for or diminishing the views of either side in that debate.’

So the ruling simply surmounted to an acknowledgement that Forstater does have the right to her beliefs – but the ruling itself went to great lengths to ensure that it was not misinterpreted:

So once the dust had settled on her headline statement  ‘We won!’, there was the stark and empty realisation that nothing, in reality, had in fact been won – hence the lapse into what many may see as total idiocy - of refuting the existence of something and then providing the proof of its existence in the very next breath.

In truth, the gender-critical position has been badly damaged because the main focus is no longer on the ruling but on the meaning of the result (i.e. nothing has changed) and the underlining statements of protecting those that are trans against anti-trans harassment.

This can only benefit transgender people within society.

If we look throughout history, it is very easy to find periods where the prevailing ‘beliefs’ of a majority were considered acceptable to express publicly and were backed by the current laws and were therefore imposed on a minority against their will.

1930’s Nazi Germany, Racial Segregation in the USA and Apartheid in South Africa, UK Homophobia in the 70/80’s, UK Women’s Rights over 100 years ago – all very different issues at different times and with different situations, but all examples where ‘beliefs’ that were allowable at the time are today fully acknowledged as being (at the very least) profoundly offensive and distressing.

Thankfully we know better, and none of these ‘beliefs’ deemed acceptable by societies and laws of that time is now deemed worthy of respect in any civilised democracy. Just because a society at some point considered a ‘belief’ permissible, that in itself doesn’t justify the morality or acceptability of that ‘belief’– none of the historical ‘beliefs’ listed are now morally or legally permissible, but anyone is still free to hold any of those views, as per the Forstater ruling, but rightly you can no longer express those hateful views publically. And yet today, it is deemed acceptable to express Gender Critical 'beliefs', so should this be permitted to continue or, like the other examples, should the free expression of this 'belief' be curtailed?

The problem, of course, is that we don’t have a crystal ball, so no matter how certain we are, we can’t state with certainty that the Gender Critical ‘beliefs’ will also be confined to history in the same way, so how can we judge now on whether these views are acceptable or not?

So let’s think about those that suffered from persecution in the examples – if they were asked whether the ‘beliefs’ legally held and expressed by the society of that time were profoundly offensive and distressing and/or even harmful, there is no question 99% of those being oppressed would strongly object (I use 99% as there is no way to prove a level of 100% and there are always a few within every oppressed group that might not agree for their own personal reasons).

But before any GC’s cry foul, I do acknowledge that they always claim they are simply standing up for ‘Women’s rights’ and that they simply speak for all Women. So do they? How accurate is this claim?

I would never disagree that Women’s rights are of vital importance – what I disagree is whether trans rights impact on or are opposed in any way to, Women’s rights.

To establish how true the Gender Critical claim of representing the views of all women, we only have to look at recent YouGov polls that track the populations' position on this issue: -

Poll Question: ‘Thinking about someone who says they are transgender, which of the following do you personally consider the most legitimate way to define what their gender is?’

3)      Their current physical characteristics at birth (e.g. the sexual organs they were born with) – 13%

The survey, therefore, confirms that a sizable majority of 57% of UK Women are fully supportive of Trans Women identifying as Women (1 + 2), whilst only 23% of Women believe our identity should be based on birth sex or on genitals (3+4).

This position is further emphasised when you compare it to the survey results from just one year ago.

So the claim they ‘talk for ALL Women’ is yet another Gender Critical lie.

So there we have it – when it is clear that the lives of a whole communities are being lived in constant fear of persecution and discrimination from ‘beliefs’ being freely expressed by a shrinking minority, why are we waiting before the hateful, harmful Gender Critical ‘beliefs’ are also consigned to the history books?

History has shown that 'beliefs' that cause genuine pain and suffering are eventually exposed, and in time stopped, so why extend this suffering any longer - these 'beliefs' are not supported and inflict genuine suffering on a minority.

It is impossible to understand the mindset of Maya Forstater and the  ‘he never said it’ Twitter rant - he did. The press just used the key phrase, and they were all pretty much in unison what that was.

Maybe it can be simply explained as another modern-day example of ‘Trump-ism’ – no matter how big a lie, just say it with enough conviction, and you will be believed.

In recent days, the discrimination of  Gender Critical ‘beliefs’ and methods of how they are spreading those ‘beliefs’  have been compared to anti-Semitism and 1930’s Nazi Germany (https://blogs.timesofisrael.com/anti-trans-rhetoric-is-not-so-different-from-antisemitism/), and now we have a similarity to Trump in the brazen, blatant way clear lies are being told. No surprise that Trump, too, holds Gender Critical ‘beliefs’.

Nazi’s, anti-Semites, and Trump make awful bedfellows, so no wonder Cisgender Women are seeing the light, and the numbers holding Gender Critical views are dropping.

The Bottom line is – Maya Forstater can legally keep her ‘beliefs’ - but worthy of respect in this or any other democratic society?

We now look back in embarrassment at the time it took to resolve and stop the inhumane treatment of targeted people, so how many more have to suffer now before we act again. It's time to finally put a halt to the pain and suffering these harmful 'beliefs' are responsible for.