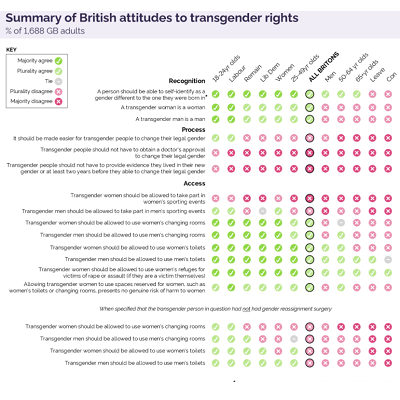 Its been a strange old week. There were whispers that the Tory government where going to finally release their new proposals concerning the Gender Recognition Act on Wednesday but that didn't happen. Boris told us things would be back to normal by Christmas (and pigs may fly Boris), and then there was that YouGov poll entitled "British Attitudes To Transgender Rights".

Now I am a contributor to YouGov polls. Most weekdays I get invited to give my opinions by way of their "Daily Questions" survey, and occasionally I get an email inviting me to undertake more significant surveys on a variety of subjects.  Very sadly, I was not invited to their Attitudes to Transgender Rights survey, which is a shame because I would have loved to have a say.

After all... the British public and YouGov are discussing my rights!

This is all so silly!

We do not discuss the right of a woman to have blue eyes or be a blonde. But YouGov and the British public are allowed to give an opinion on my sex/gender and how I should "prove" to be a woman.

Well, I object to having to prove my sex or gender just as any other woman or man should. But if you insist on checking me out, I am damn sure I look a hell of a lot better than most 68-year-old women and I would suggest my "Home Page" image proves this.

Or would you like me to show you my genital surgery scars?

Tell you what...I will lift my skirt if you do the same for me.

I am not interested in your sex or gender, and quite frankly, you should not be involved in mine either.

I do my very best to be a good woman, a good human being, in fact, a good everything.

I stand up against discrimination and go out of my way to promote that we are all equal.

And this is the root problem with the YouGov British Attitudes to Transgender Rights. The very fact that people are discussing MY rights means I am not equal.

To the uninitiated, this is called cis privilege.

So as I am being forced (yes forced) to accept that other people can affect my human rights, what did this nasty cis privilege survey tell me?

If you look at their matrix and add up the green "supportive" dots and compare to the red ("unsupportive") dots people (by a small margin) are overall supportive of trans folk and improved rights.

And so they should be because on the same day as this crass survey was published the Office of National Statistics confirmed that trans people were twice more likely to be victims of crime than cis folk.

In short, we are victims.

Victims of criminals and public victims of other peoples opinions. Why not bring back the stocks and throw rotten tomatoes at us?

So what else did the YouGov survey of Transgender Rights tell us?

Actually, when you think about it, something very significant.

That the British public just does not understand our fight.

For the first question asked by YouGov was if they approved of trans folk being able to self-id. And everyone (even the 65-year-old plus group) said we should be able to self-id.

And then to another question the British public (well actually all 1688 of them) said the legal process to change gender should not change.

This is a total contradiction!

The bottom line is British people (well a very significant majority) just do not understand how complicated it is to socially and legally change sex.

Strike a light!  Actually, I want to swear, but it is not ladylike.

The YouGov British Attitudes To Transgender Rights survey did tell us a little more though (as if we had not guessed). The problem is us older folk, Tories and "leave voters".

Now actually I was a leave voter, and while this blog is certainly not about the EU and I stand by what I voted, I would now accept that the leave camp lied.

And I dislike liars just as much as I hate discriminatory people.

The word "liars" is a strong word, but I am afraid I am going to have to use it again. Because when Teresa May launched the public consultation in regards to the reform of the Gender Recognition Act, she did so on the grounds of respect and acknowledgement that trans lives should be made easier.

And here is the problem.

Despite 70% of the one hundred thousand responders being pro-self-id Mr 52% (I mean Boris Johnson) has decided apparently to listen to the 30% who are against self-id.

So that's called democracy? Apparently the Tory elite reckons the result of the public consultation was skewed!

Perhaps we should turn back the clock and say the 48% won the EU referendum?

The trans community has been lied to.

The trans community are victims.

The trans community deserve much better!

So here is my message to YouGov.

Before asking questions by way of your surveys for goodness sake make sure people really understand what they are saying!

Because in the "British Attitudes To Transgender Rights" survey they clear as hell did not have a clue on what they were actually reporting back to you!